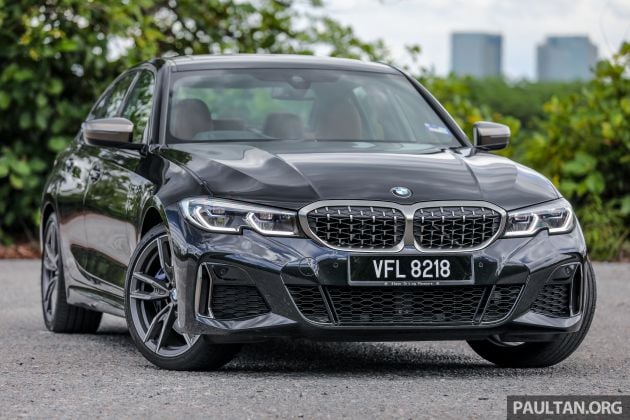 What BMW achieved with the seventh-generation G20 BMW 3 Series cannot be understated. The 3 Series mould was considered by enthusiasts to be “broken” for the first time when the F30 shipped with electric power steering and a range of blown four-potters.

Compared to the E90, it grew considerably as well, ballooning in dimensions that many will find perfectly acceptable for a compact executive sedan, even by today’s standards. Its turbocharged engines were peppy and fuel efficient, plus the brilliant eight-speed auto made light work of just about anything thrown at it.

Short of the F80 M3, enthusiasts who wanted more firepower didn’t really have a viable straight-six Bavarian alternative, because the F30 335i (which later became the 340i) was never offered through official channels. Thankfully, that is no longer the case. 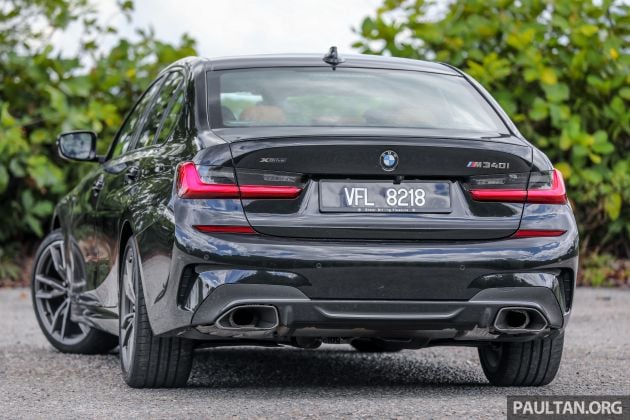 Judging solely on looks, there’s hardly anything loud or shouty about this M Performance model. Like the C 43, it’s rather unassuming, almost too mellow for most fellows. You’re lucky it bellows (sorry, cabin fever), but we’ll get to that later.

There’s much to like here. Its iconic long bonnet will never get old, and unique to it are the mesh kidney grille with active flaps (easily better looking than the M3/M4), M Aerodynamics pack with cerium grey accents, 19-inch dual-tone staggered wheels, blue M calipers, a tiny spoiler on the bootlid, and a model-specific rear bumper with dual integrated trapezoidal exhaust finishers.

Regular G20 owners can mod their cars to look like this, but one way of spotting the real deal is to look at the headlights. Besides the M3, the M340i is the only other 3 Series variant to get the top-of-the-line BMW Laserlights with full-length LED daytime running lights. These are plenty bright at night, by the way, and the beam throw easily provides over 500 metres of visibility in the dark. The Light Carpet is a nice bonus, too.

Inside, things don’t really get much better than the already excellent 330e and 330i M Sport. It’s not so much a bad thing, because in just two life cycles, the 3 Series has been transformed from the dull and unexciting interior of the E90 into one that feels thoroughly premium and modern. Granted, it may seem unexciting to those comparing it against the C-Class, but the cabin of the G20 is a genuine step up over the F30.

Standard here is the BMW Live Cockpit Professional, which features a flicker-free 12.3-inch fully digital instrument display with the M340i badge in the middle. It’s perfectly legible in all lighting conditions (even in direct sunlight) thanks to the matte finish, and the symmetry in which the speedo and tacho are designed is pleasing to my eyes.

The 10.25-inch touchscreen display with BMW Operating System 7 is also great to work with. Smartphone pairing works all the time without glitching, though this being a CKD car requires buyers to pay a one-time fee of RM1,299 to get wireless Apple CarPlay functionalities. This is unacceptable – there’s no reason why this shouldn’t be standard.

If it’s any consolation, there is a nice-sounding 464-watt 16-speaker Harman Kardon Logic 7 sound system as standard, plus other goodies such as triple-zone climate control, a Qi wireless smartphone charging tray, twin cubbies, a useable stowage area below the centre armrest (like finally), M stripes on the seat belts, aluminium tetragon trimmings and LED ambient lighting.

The Cognac Vernasca leather upholstery is a treat, though a more traditional black option is available as well. The rear quarters offer greater legroom than before, and the low profile rear head restraints allow a decent rearward view for the driver. Boot space remains at 480 litres, and there’s a 40:20:40 split for the seatbacks this time around. Thank you, BMW. There’s just one twin-scroll turbo at work, which does an impeccable job at eliminating lag. The six-pot may be down on power compared to the 2.0L four-banger in the Mercedes-AMG A 45 S 4Matic+, but make no mistake, this thing is ridiculously powerful. And creamy, too! There really is no replacement for the straight-six’s magical firing sequence.

BMW is a master of the inline-six. The B58 is silky smooth and so deceptively well mannered on regular drives, but prod the pedal and it lurches forward with a deadly sense of urgency. It’s meaty in the mids and produces an intoxicating wail when brought to the 6,500 rpm redline, followed by the customary spurts of overruns on the upshift. Oh, the joy.

In Sport mode, the M340i is an absolute weapon. The engine becomes much more responsive with absolutely no hint of turbo lag at all, and the expertly tuned eight-speed gearbox makes sure that you’re in the right gear almost 100% of the time. The Adaptive M Suspension also stiffens up the dampers here, creating a highly precise tool that is palpably more potent a drive than the C 43. The brakes (four piston up front, single pot at the back) are very grabby and do a good job at controlling pitching, so balance is very easily restored upon lift.

The ZF gearbox is a different animal for the simple fact that it has BMW M’s Steptronic Sport mapping. Split-second shifts, no slippage, just raw performance. Imagine getting the best of BMW’s brilliant eight-speed auto, plus the aggression of a Volkswagen DSG – that’s what this feels like. It’s pretty self explanatory in Comfort mode, but in Sport mode, it knows exactly when to downshift, making sure the engine is always in the right power band for peak acceleration.

Speaking of which, at full pelt, the M340i will do the century sprint in 4.4 seconds (consistently too, with the built-in Launch Control function), or about one-tenth of a second quicker than the previous generation F80 M3. That is wild, and it’s all thanks to the xDrive all-wheel drive system that efficiently puts power down to the ground. BMW does offer a rear-wheel drive M340i as well, but that’s only sold in the US.

AWD isn’t such a bad thing. There’s gobs of grip, and you’ve got to be an absolute hooligan to even get this car to slip. It’s rear-biased so as to not sully the experience of driving a 3 Series, plus you do need the extra claws for check and balance. M Sport differential (electromechanical unit) with fully variable rear-wheel locking is standard, handy for chasing lap times, if you’re into that sort of thing. Immense grip aside, the only gripe with xDrive is the larger turning radius, but it’s no biggie.

Ride in Comfort and Eco mode is just like a basic, well-sprung 3 Series, and generally more comfortable than the 330i M Sport’s passive sports suspension. I’ve had passengers in their 20s and 80s who had nothing negative to say of its damping qualities, which says a lot about BMW’s CLAR platform in the age of SUVs.

Refinement is also an area that has been improved over the F30. Engine and wind noise are definitely better isolated this time, though the only thing that really sticks out is tyre roar. This, fortunately, becomes audible only at triple-digit cruising speeds, but will of course get progressively worse as the tyres degrade. 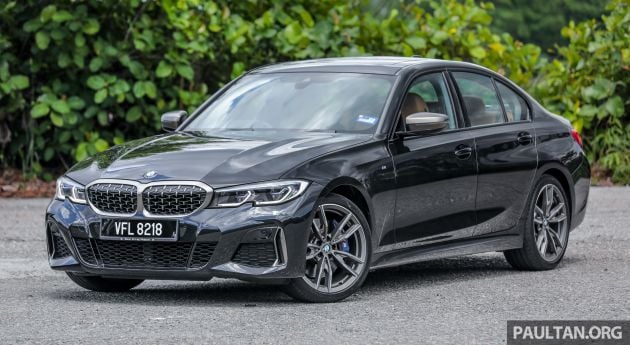 I almost have nothing bad to say about the M340i. Honestly, for the longest time, there hasn’t been a car that feels so right in so many places. It’s a proper premium car with actual premium finishes; it’s a proper weapon out on the roads, and it seats five comfortably with a boot that’s big enough for a small family to go on a mini vacation.

But is it worth RM389k? Is it worth coughing up an additional RM120k over the 330i? And is it a better buy compared to the AMG C 43? Well, as much as I enjoyed driving the C 43 back in 2017, the M340i runs rings around the Merc. The tiebreaker for me is the perfect pairing of the straight-six engine and eight-speed auto. But if you prefer the aesthetics of the C-Class, that’s a pretty solid alternative, too.

When we were handed the keys to the M340i earlier in the year, we were told that the initial batch of M340i have all snapped up. It sold like hotcakes, and the wait list was about six months-long. Now, we live in a world where cars like this M340i will gradually be phased out in favour of going fully electric, so if you want a taste of a no-compromise BMW, this is it.