Porsche always sees a new niche for the 911 lineup, and these are the first spy shots of what we believe to be the upcoming ST variant. It pays tribute to a small-run racing model from the early 1970s.

The new ST uses the Porsche 911 GT3 Touring as a starting point. The front end doesn’t appear to change until your eyes reach the additional panel behind the front wheels. We’re seeing something similar, albeit a less aggressive version, on the 911 GT3 RS development vehicles. This ST also has the double-bubble roof from the recently launched Sport Classic. 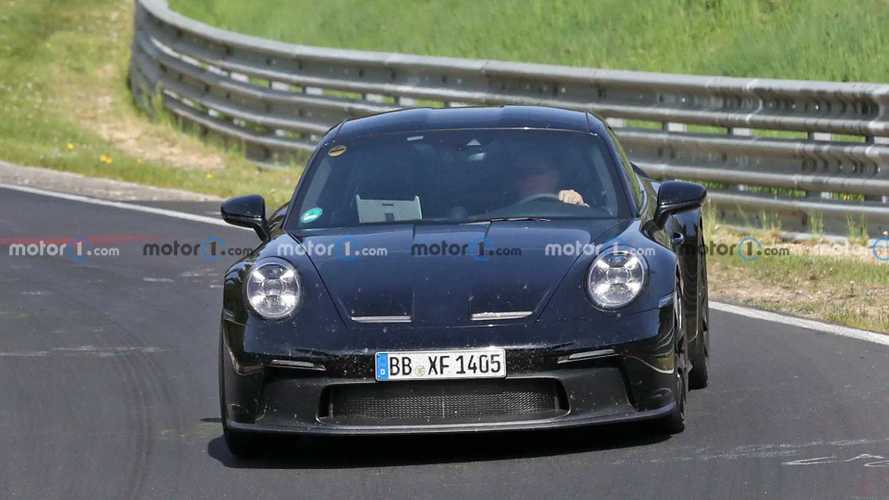 It’s a tiny detail, but the 911 in these shots has pull handles for the doors. We are also seeing these pieces in GT3 RS spy shots. In comparison, the ones on the regular GT3 are mostly flush with the body.

This 911 rides on center-lock wheels with widely spaced Y-shaped spokes. Large, drilled brake discs are visible behind them.

At the rear, there’s a black circle on the engine cover’s mesh. Our spies believe this is the location for the Porsche Heritage logo like the one on the Sport Classic. The rear diffuser with a pair of center-exit exhausts in the middle appears to be the same piece from the 911 GT3 Touring.

The current info suggests the new 911 ST would share its engine with the GT3 Touring. If so, the model would have a naturally aspirated 4.0-liter flat-six making 502 horsepower (374 kilowatts) and 346 pound-feet (469 newton-meters).

We have no info about when the 911 ST might debut.

According to a rumor from 2021, Porsche plans to build three heritage versions of the 911. The first is the recently debuted 911 Sport Classic. The ST comes next. Finally, there’s allegedly a revived RS. Details about this last one are still sketchy, but the tweaks reportedly include a ducktail spoiler, retro-style upholstery, and significant lightweighting.

Porsche made only a handful of original STs. They were race cars with a focus on lowering the weight with pieces like lighter body panels. Flared fenders made room for a wider track.