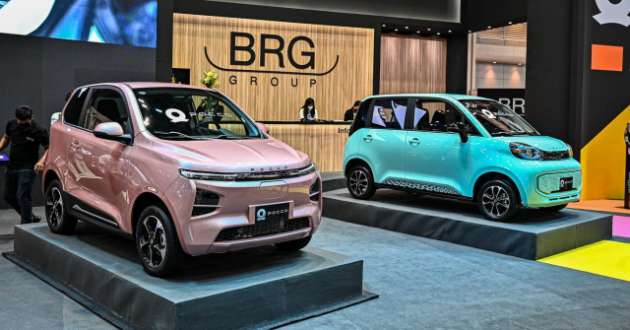 Pocco Thailand, which is managed by parallel importer BRG Group, has launched the Pocco Meimei (MM) and Duoduo (DD) at the ongoing Thailand International Motor Expo. Both electric city cars are fully imported from China and arrive in left-hand drive form only.

If you haven’t heard of Pocco before, it is a relatively new brand from China under the Yogomo Group, which started out as a LSEV (low-speed electric vehicle) maker. According to CarNewsChina, the brand is aimed at younger drivers and its Chinese name is Pengke, which translates to “punk.”

The difference here is the battery pack used, with the YX sporting a 9.2-kWh unit for a range of 116 km (NEDC standard). The more expensive ZX has a 14-kWh battery instead for a max range of 170 km, although both are said to reach a full charge between six to eight hours via a Type 2 AC connection – 220-volt outlet.

Both DD variants share the same electric motor, although this one is more powerful than the one used in the MM, providing 39 PS (39 hp or 29 kW) and 110 Nm for a top speed of over 100 km/h. Like the MM, the price difference is due to the battery pack used, with the L having a 10.3-kWh unit that contributes to its 750k kg heft and provides a range of around 128 km.

The K gets a 14.5-kWh battery that brings the weight up to 805 kg, while increasing the range to 178 km. Like the MM, the time need for a full charge for both is between six to eight hours using the Type 2 port located at the front.

All MM and DD variants come with fabric upholstery, halogen headlamps, a touchscreen infotainment system integrated into the dashboard, a rotary gear selector and 13-inch alloys (155/65 tyres). The MM’s headlamps are a two-tier arrangement, with LED DRLs placed above the main headlamps, while the DD has normal headlamps that are linked by a black trim piece.

So, what do you think of the Pocco duo? Is an ultra-compact urban EV something that might interest you? Keep in mind that both are smaller than the Perodua Axia we have here, which measures 3,645 mm long, 1,620 mm wide, 1,510 mm tall and with a 2,455 wheelbase. Additionally, the cheapest offering – the DD L – costs more than the top-spec Axia AV, but with fewer creature comforts.