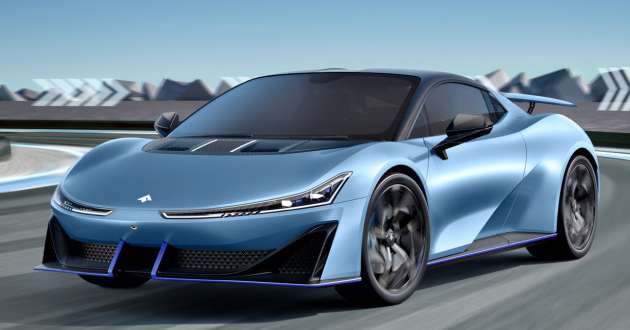 Aion is an electric vehicle (EV) sub-brand under China’s Guangzhou Automobile Group (GAC) that currently sells fully electric sedans and crossovers. Recently, the company announced that it was entering the electric supercar segment by revealing the new Hyper SSR.

At first glance, the Hyper SSR looks the part with its butterfly doors and body that is primarily made of carbon-fibre to keep the weight down. Other standout design cues include slender headlamps that nearly span the width of the front end, large air scoops in the lower apron, equally thin taillights, a prominent diffuser and an active rear wing.

The sporty yet modern design approach extends into the minimalist cabin, which features a rectangular-shaped steering wheel akin to those found in race cars and machined metal pedals. You’ll also find carbon-fibre panels and well-bolstered seats, along with a small 8.8-inch digital instrument cluster ahead of the driver.

There’s also a much larger 14.6-inch touchscreen infotainment system placed prominently on the dashboard above the centre air vents, while the long centre console houses practical cupholders and an armrest for passengers to enjoy.

In terms of powertrain specifications, the base version of the Hyper SSR will be rear-wheel drive and its electric motor is paired with a two-speed transmission. This option will cost 1.286 million yuan (RM827,839) and can get from 0-100 km/h in 2.3 seconds.

There will also be an all-wheel drive variant called the Hyper SSR Ultimate that is priced at 1.688 million yuan (RM1,085,586). With another electric drive unit at the front, the Ultimate’s total system output is 1,225 hp and wheel torque is at 12,000 Nm, which reduces the century sprint time to 1.9 seconds. The high torque figure should refer to the combined total torque being applied to the wheels, not at the output shafts of the electric motors, so it’s harder to make an apple to apple comparison with the spec sheets of other supercars.

Orders for the Hyper SSR are now open, with deliveries expected to begin in October 2023. If you’re curious about the EV supercar’s size, it measures 4,538 mm long, 1,988 mm wide and 1,238 mm tall. The width and height are similar to the Rimac Nevera, which is another ultra-fast EV, although the Croatian offering has a longer overall length of 4,750 mm.