The Ford Flex disappeared in 2019, but its boxy approximation to the new Ford Bronco made it the perfect vehicle to use for a new patent filing. In 2020, FoMoCo filed for something that feels strategically designed for the brand’s new off-roader – replaceable fenders with integrated storage and steps.

The filing, published last week, shows a replaceable front fender that adds some utility. It features a grab handle, a tool storage cubby, and integrated steps. Ford says in the patent that people could use the steps to access cargo on the roof or to spectate at a sporting event. The Bronco already features removable fenders, and it only makes sense that Ford offers customers something to replace them with, although we have no idea if this patent will turn into a real product. But it should. 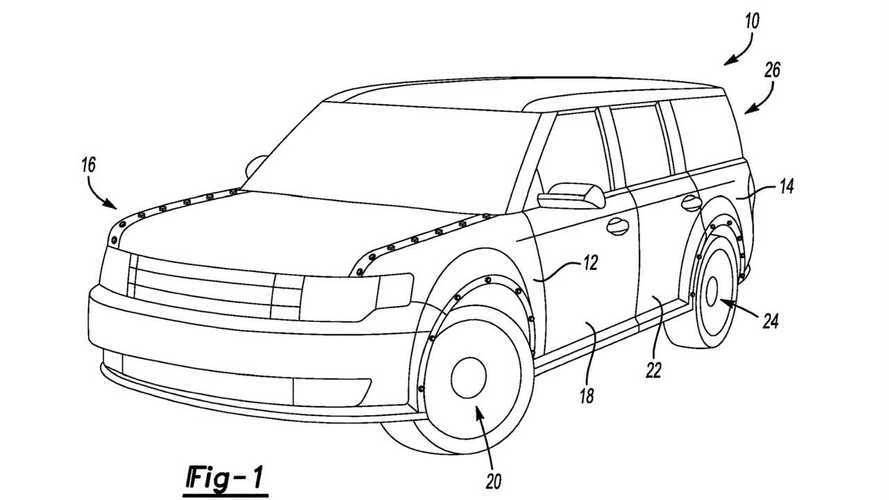 Removable fenders allow customers to protect their vehicle’s paint from damage and for the SUV to squeeze through narrower trails. Ford offers a host of off-road upgrades and goodies for the Bronco, and a useable fender replacement seems like a no-brainer idea that could print some profits.

Ford has filed other off-road-oriented accessories in recent months. Late last year, a filing emerged for a retractable exhaust tip, which could help to protect it while off-roading or Ford could design a shorter tailpipe. The company also filed a patent for an autonomous deployable drone that’d work to scan off-road terrain. Both could have appeal to off-road enthusiasts.

Ford will surely expand its lineup of Bronco accessories in the coming months and years as it learns what its customers want. A replacement fender is a neat idea with many possibilities, including additional storage cubbies or other features. There’s plenty in store for the Bronco’s future, which includes the high-performance Bronco Raptor that’s right around the corner.

Source: US Patent And Trademark Office