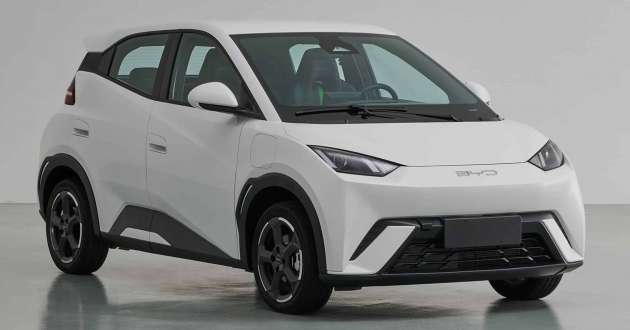 BYD will soon add a new city car called the Seagull to its line-up, according to details published by China’s ministry of industry and information technology (MIIT). The upcoming electric vehicle will be part of the carmaker’s Ocean series, which includes the Dolphin, Seal, Destroyer 05 and Frigate 07.

Based on the MIIT images, the Seagull will feature angular headlamps (LEDs are optional), black plastic cladding, a roof spoiler and taillights that are designed similar to the BYD D1 small MPV. Wheel sizes range from 15 to 16 inches, and the kerb weight is listed as between 1,160 to 1,240 kg.

Spyshots reported by the publication also reveal an interior that is lightly inspired by the Dolphin, with two displays on the dashboard, a dual-tier centre console that accommodates two cupholders and a wireless charging pad, and a three-spoke steering wheel with a protruding airbag module.

As for the powertrain, the Seagull will use a lithium iron phosphate (LFP) battery made by FinDreams, which is a company under BYD. The battery is said to have an unverified energy capacity of 30.7 kWh and will power an electric motor good for 75 PS (74 hp or 55 kW). Rivals in this space include the Leap T03, Chery Unbounded Pro (also known as the Chery QQ Wujie Pro) and Ora White Cat by Great Wall Motor.