Hyundai doesn’t sell the Palisade in Europe, but that’s not stopping it from testing the facelifted version near the Arctic Circle. Actually, the previous statement is not entirely accurate since the large SUV is available in Russia where it’s also built. The Creta small crossover and Sonata are also on sale in Putin’s country. Positioned above the Santa Fe, the three-row family hauler is preparing for a nip and tuck set to arrive later this year.

We’ve seen those wheels before, specifically on the range-topping Calligraphy trim level where the 20-inch set has the same angular and asymmetrical design. The redesigned front grille peeking through the mesh looks quite glitzy and further suggests we are looking at the cream of the crop. It is believed Hyundai’s designers are extending the headlights to meet the grille to echo the latest Tucson. 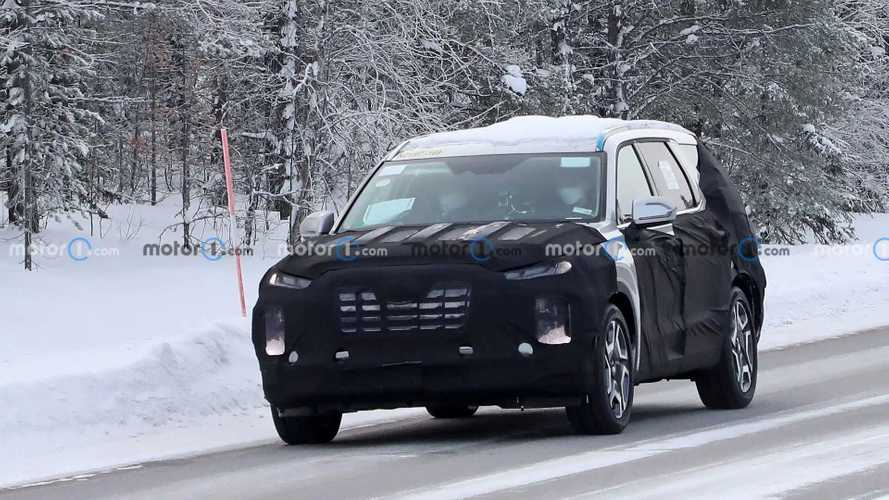 Arranged vertically, rectangular cutouts in the camouflage at the back could be for an extra set of taillights mounted on the tailgate. There’s not much else we can see for the time being, although the heaps of disguise could conceal some tweaks to both bumpers. The side mirror caps with their nifty turn signals will be carried over.

Some test vehicles were caught a while ago at home in South Korea and the man with the camera took a snapshot of the interior. The cabin looked virtually the same, although we’re sure Hyundai will make some changes to the trim and whatnot, aside from updating the infotainment system to the latest version. There could also be more safety tech on board, and we wouldn’t exclude the possibility of a hybrid and/or plug-in hybrid powertrain.

Based on a presentation shared with investors by Hyundai in May 2021, the facelifted Palisade will be out later this year together with a mid-cycle update for the Sonata.