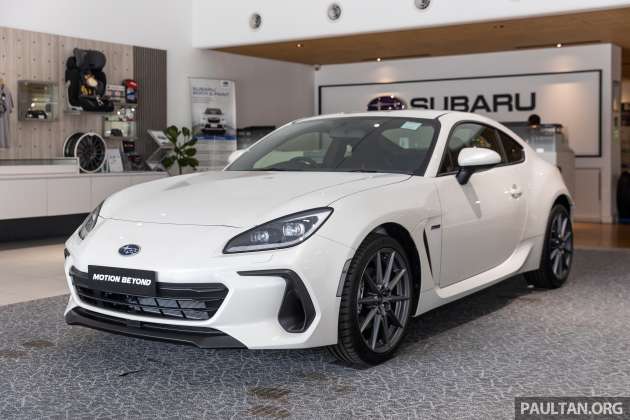 The 2022 Subaru BRZ first made its global debut back in November 2020, and we finally managed to capture a full gallery of the second-generation (ZD8) sports car on Malaysian soil for your viewing pleasure. The car you see before you, which is finished in Crystal White Pearl, was put on display by Motion Beyond Sdn Bhd at the company’s Subaru Setia Alam 3S centre.

For the rear-wheel drive ZD8, both the manual and automatic are available, the latter being equipped on this example. Performance-wise, the automatic variant takes 6.8 seconds to get from 0-100 km/h and will hit a top speed of 216 km/h, while the manual requires 6.3 seconds and maxes out at 226 km/h.

One reason to opt for the self-shifting transmission is the inclusion of Subaru’s EyeSight suite of safety and driver assistance systems that includes active cruise control, front vehicle departure alert, autonomous emergency braking (front and rear) and false start suppression control – the manual variant does not get these systems. In terms of design, the ZD8 is an evolution from the original, with teardrop-shaped LED headlamps at the front that feature C-shaped LED daytime running lights that double as indicators. The bumper also sports a hexagonal-shaped intake flanked by sharp creases leading to L-shaped trim surrounding the air curtains.

Down the sides, the C-pillars are reprofiled to flow flow further into the rear deck and onto a ducktail on the boot lid. You’ll also find function side vents to extract air from the front wheel wells, which meet up with pronounced rocker panels that sweep upwards near the wheel wheels.

At the rear, the taillights are new, also with a C-shaped lighting signature and linked by a trim piece the integrates the boot release button. In Japan, the higher-end variant of the BRZ is the S, which comes with 18-inch wheels like what you see here, while the lower-end R gets 17-inch units. 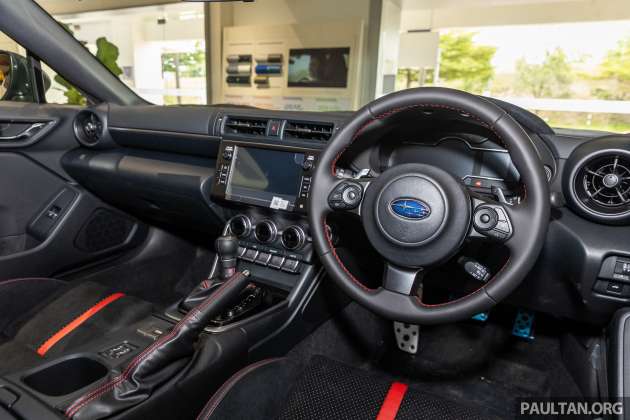 Inside, the BRZ maintains its 2+2 seating layout but receives a simpler dash design. Highlights include rectangular central air vents nestled above an eight-inch touchscreen infotainment system, a protruding glove box ahead of the front passenger, new air-conditioning controls with piano-key switches (negates the previous car’s storage cubby) and a seven-inch digital instrument cluster.

We’ve included photos of both the second-generation BRZ as well as the facelifted first-generation model so you can spot the differences between the two with live photos. Do you like the look of the former more than the original?