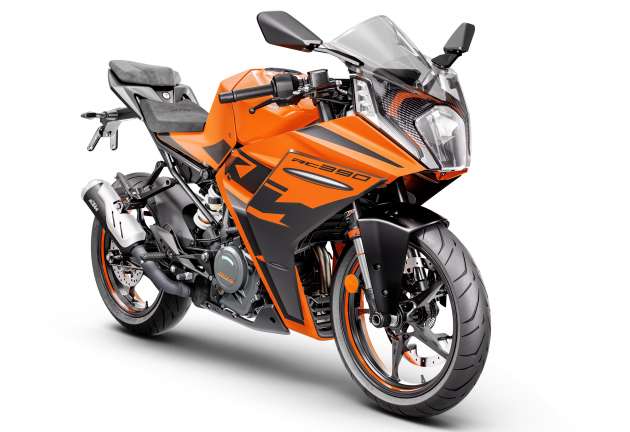 With the release of the 2022 KTM 890 Duke R naked sports (priced at RM75,800) and the RC390 (RM33,800) sportsbike in Malaysia, paultan.org was invited to take both out for a media test ride at Sepang International Circuit (SIC). Intended for very different market segments, the 890 Duke R and RC390 round out KTM’s stable of road bikes in Malaysia.

For the 890 Duke R, this naked sports goes up against the likes of the Ducati Monster and Streetfighter V2, Triumph 765RS and Yamaha MT-09 in the local market. A development of the previous generation Duke 790 “The Scalpel”, the 890 Duke R gets the tinker “The Super Scalpel” and turns things up a notch.

Like the 790, the 890 Duke R carries a parallel-twin power plant, in this form putting out 119 hp and 99 Nm of torque from 889 cc. As typical for KTM motorcycles, power goes through a six-speed gearbox – an optional up-and-down quickshifter is availabe – and PASC slipper clutch with chain drive to the rear wheel. 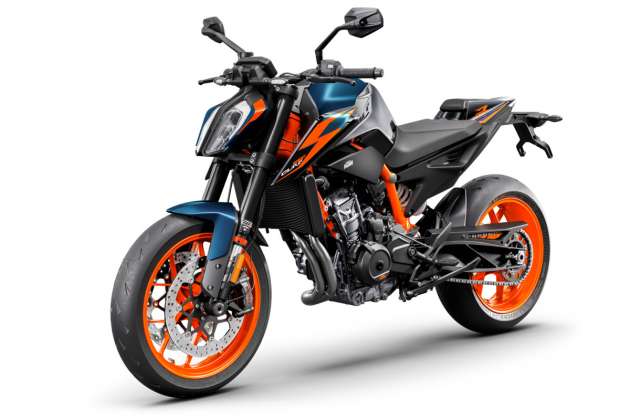 The suspension is coupled with lightweight alloy wheels, minimising unsprung mass and allowing for faster turn-in and changes of direction. Taking the 890 Duke R out on the track, the bike was set to Sport mode, one of four available modes the others being Street, Rain and Track mode which switches off rear wheel ABS. 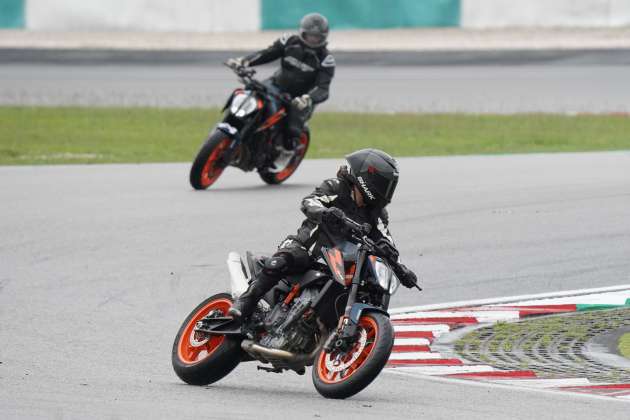 With wheelie control in place and expressly forbidden by SIC track day rules, we didn’t find out how easy it was to hoist the 890 Duke R’s front wheel but going by the urge shown when accelerating through the gears, we can safely assume the Duke R’s reputation as a wheelie machine remains intact.

Gear shifting was precise and the 890 Duke R rapidly brings the rider to some 220 km/h (plus) on the Sepang front straight. Naturally, being a naked sports bike, the wind blast is bothersome at very high speeds and we kept to below 180 km/h for most of the session we had.

What is the 890 Duke R’s forte is handling, more specifically, its ability to change direction quickly and hold the line. Taking the curves at Sepang, we noticed the 890 Duke R was a little more sure-footed than the 790 Duke. 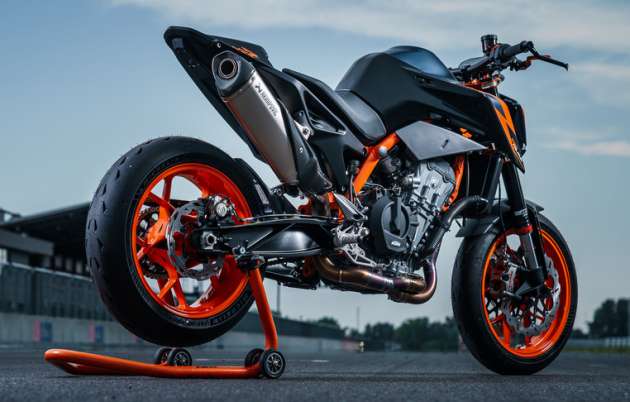 There was not hint of any suspension wallow with the bike simply taking the line the rider chose and keeping it there. Corner exits were similarly predictable and confidence inspiring with an ever so slight tendency to head to the outside of the corner as the bike was pulled up into a straight line.

The upright seating position is suitably aggressive for track work without being unduly uncomfortable. At this point we reserve judgement on road comfort from the seating as we have yet had the opportunity to do so, perhaps when a review 890 Duke R becomes available from KTM Malaysia.

Overall, the 890 Duke R delivers what it promises, sharp handling with enough power for any rider to get on and play. Moving on to the RC390, KTM’s little sportsbike has been revamped along the veins of its sibling, the Duke 390 naked sports. 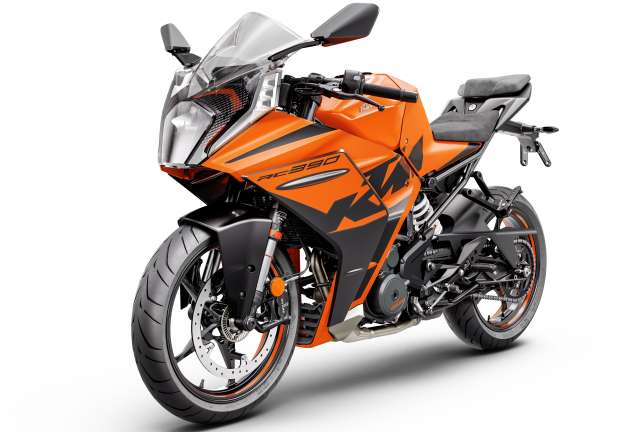 A new face adorns the RC390, with LED DRLs and headlamp assembly brought up-to-date. Inside the cockpit, a colour TFT-LCD panel similar to the Duke 390 is found, and includes Bluetooth connectivity to the rider’s smartphone.

Engine-wise, performance is similar to the Duke 390, the RC390 getting a claimed 42 hp and 37 Nm of torque from its 373 cc, liquid-cooled, single-cylinder, with DOHC and four-valves. A PASC slipper clutch equipped six-speed gearbox with quikcshifter gets power to the rear wheel via chain drive.

Also new for the RC390 is ride-by-wire throttle along with more precise engine mapping and traction control. Standard equipment is cornering ABS on the front and rear wheels along with the option to engage “Supermoto” mode, where the rear wheel is allowed to lock up and skid for use on the track.

As we approached the RC390, we were told some changes have been made to the riding position and indeed, it was so. The 2022 RC390 has a less extreme riding position than the previous generation, with the rider less in a racing tuck with slightly more space to move around.

Upon heading out on the track we found the riding position much to our liking, allowing for a good attacking position in race mode while being street sensible at the same time. Definitely a plus for the young rider the RC390 is intended for who would likely be using the RC390 as their only form of two-wheeled transport.

Taking the first first corners on a wet track, the RC390 displayed good road manners, with lots of feedback from the 43 mm diameter upside-down front WP suspension with 30-step adjustment for rebound and compression. At the rear, the WP Apex monoshock is rebound and preload adjustable and performance was good though we did wish there was time to adjust the suspension to a slightly softer setting considering the riding conditions. 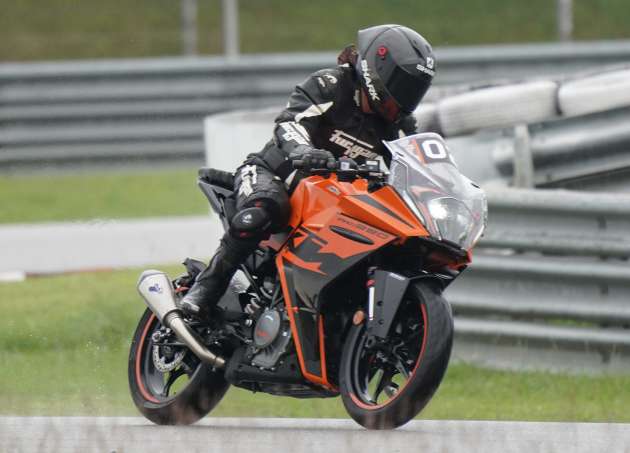 Be that as it may, the RC390 is a nippy little sportsbike, taking the rider’s input at the controls and translating it into changes of direction well. We did run into a little quirk of the RC390, also shown in the Duke 390, in that there was more tyre than cornering clearance.

The RC390 cornered perfectly well, without major drama but on return to the pits, it could be seen there was more tyre left for cornering, the infamous “chicken strip”, as it were. Not a fault and absolutely nothing wrong with it but to take best advantage of the RC390’s handling, you’re going to need racing rearsets and tyre warmers.

Overall, the general impression we got from the RC390 is that it is a fun little sportsbike, easy to handle and lightweight at 155 kg dry. Competition for the RC390 in Malaysia includes the Honda CBR250RR, Yamaha R25 and QJMotor SRK250RR, all of which are two-cylinder machines.