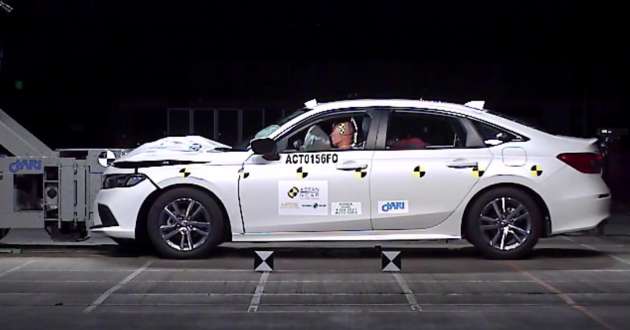 The New Car Assessment Programme for Southeast Asian Countries (ASEAN NCAP) has given the latest Honda Civic a five-star rating following its latest round of testing. The Civic is Honda’s first model to undergo the new ASEAN NCAP 2021-2015 protocol, which covers additional elements like automatic emergency braking (AEB).

According to the report, the tested variant was the EL+ sold in Thailand, with the provided rating also applicable to all other variants sold in Singapore as well as Indonesia. Malaysia isn’t listed as the model has yet to go on sale, but if the safety kit is the same as in these three active markets, expect this rating to also be applicable.

In Thailand, Singapore and Indonesia, the Civic comes standard with six airbags, key passive safety systems and the Honda Sensing suite. For adult occupant protection, the Civic scored 29.28 out of 32 possible points, with full marks (eight out of eight) given for the side impact test, while its lesser for the frontal impact (14.54 out of 16) and head protection technology (6.74 out of eight) tests.

Moving on to child occupant protection, the dynamic test, which involves front and side impact assessment, saw maximum points (24 out of 24) being awarded. However, lower scores for installation, vehicle based and child presence detection resulted in a total overall score of 46.72 out of 51 points.

The Civic impressed in the safety assist category, notching up 19.07 out of 21 possible points. With the Honda Sensing suite, systems like autonomous emergency braking, lane departure warning, lane keep assist, a driver attention monitor, automatic high beam are all standard on the Civic.

These systems all registered full points in ASEAN NCAP’s assessment, with the only blemish being the rear seatbelt reminder system, which is standard or optional depending on the market the Civic is sold in.

As part of the new protocol, motorcyclist safety is a new pillar added to the assessment. Here, the Civic only managed 8.32 out of 16 possible points, with the lack of a proper blind spot monitor (there’s LaneWatch instead) resulting in just 2.32 out of eight possible points. The testing protocol also accounts for the fitment of an advanced rear visualisation (ARV) system, which is basically having a camera placed at the rear of the car (typically referred to as a digital rear-view mirror).

No points were given to the Civic for ARV because it’s not offered in the markets mentioned above, but everything else like automatic high beam, pedestrian protection and AEB system’s ability to detect motorcycles netted maximum points. Factor in the weighting attached to each category, the overall score for the Civic was 83.47, warranting five stars.