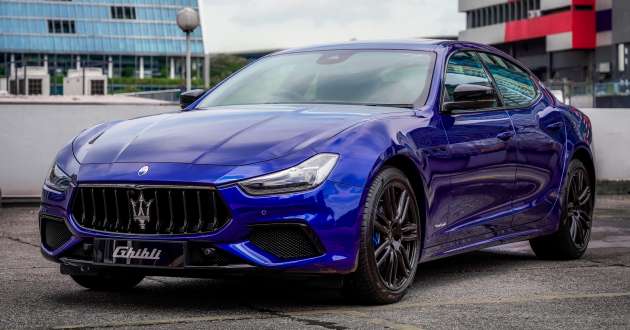 Naza Italia has launched the new Maserati Ghibli Hybrid in Malaysia, several months after the brand’s first electrified model made its initial debut in July last year. Prices start at RM427,800 for the base trim level, while the GranSport’s goes for RM456,800 – a three-year, unlimited-mileage vehicle warranty and three-year, 60,000-km free maintenance package are included as standard.

Unlike with the 2019 Ghibli facelift, we’re only getting base prices for the Ghibli Hybrid, so the figures mentioned are not inclusive of local duties and taxes, or even insurance and on-the-road costs for that matter.

Under the bonnet, the Ghibli Hybrid is equipped with a 2.0 litre turbocharged four-cylinder petrol engine that is augmented by a 48-volt alternator and an additional “eBooster” electric supercharger. The eBooster unit draws power from a battery mounted in the rear of the car and helps to fill in the torque gaps before the turbo spools up, while the mild hybrid system recovers energy during braking and deceleration.

For the sake of comparison, the base version of the non-hybrid Ghibli is more powerful, as its 3.0 litre twin-turbo V6 makes 350 PS and 500 Nm, which is good for a zero-to-100 km/h time of 5.5 seconds and a 267 km/h top speed. That specific model, following our 2019 launch story, retailed at RM618,800 nett (excluding insurance or on-the-road costs but inclusive of local taxes and duties).

Braking power for the Ghibli Hybrid comes from discs measuring 345 mm at the front with Brembo four-piston calipers, while the rear gets 330 mm discs and single-piston calipers. This pairing allows the hybrid model to decelerate from 100 km/h to a dead stop in just 35.5 metres. 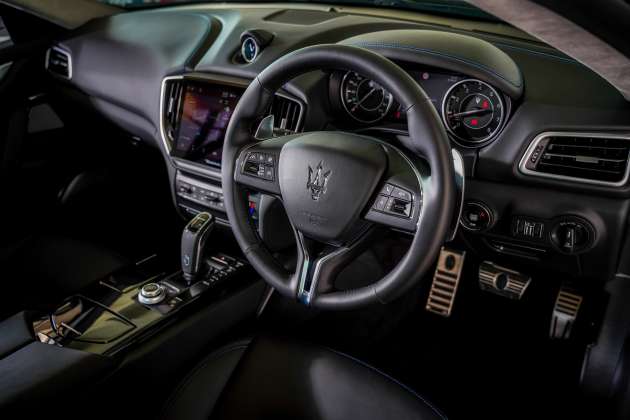 The Ghibli Hybrid gets a few distinct styling cues to set it apart from other Ghibli models, chief among which are the blue accents applied on the side air ducts, brake calipers as well as the trident logo on the C-pillars. Elsewhere, the vertical bars on the front grille have been reshaped to resemble a tuning fork, while the rear gets a new boomerang-like lighting signature for the taillights, said to be inspired by the 3200 GT and the Alfieri concept car.

Moving inside, the cabin gets blue stitching on the seats to mirror the hue on the outside, joined by a digital instrument panel and a new Android-based infotainment system that is linked to a larger 10.1-inch touchscreen display. The kit list also includes advanced driver assistance systems (ADAS) like adaptive cruise control with stop & go, lane keeping assist, a blind spot monitor and AEB.

In GranSport guise, the car gets sportier bumpers with black highlights, the Nerissimo package and 20-inch wheels. This trim level also adds sports seats upholstered with full-grain “Pieno Fiore” leather, wood trim is finished in carbon twill high-gloss and Alcantara roof lining. A 15-speaker Bowers & Wilkins sound system is available as an option, which comes with 1,280 watts of amplification and QuantumLogic Surround.